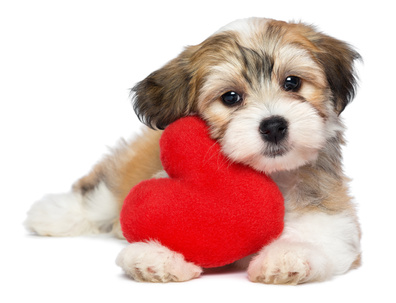 Valentine’s Day is a great time to show the ones you love just how much they mean to you. We spoil our significant others with flowers, balloons and lots of chocolate. In fact, almost 58 million pounds of chocolaty goodness is sold during Valentine’s Day week.  While we may love the creamy confection that comes wrapped in glittery hearts, our dogs are also tempted. Unfortunately, they tend to be ruled by their stomachs and are clueless to the dangers that chocolate poses for them. Dogs and chocolate can make for a dangerous combination.

The Dangers of Chocolate for Dogs

Dogs and chocolate can be a dangerous mix. Chocolate contains caffeine and a chemical called theobromine, which can be toxic to your dog. Between the caffeine and theobromine found in chocolate, your dog could suffer some serious health complications like gastrointestinal problems, nervous system and heart issues, and could ultimately lead to seizures or cardiac arrest after ingesting chocolate. Even a small amount of chocolate can cause vomiting and diarrhea.

Theobromine is the chemical that causes the majority of health problems for dogs that eat chocolate. The concentration of theobromine is highest in dark chocolate, making it the most potentially toxic. Poisoning can occur at a dose as low as 220 milligrams of theobromine per pound of body weight.

What Happens If Your Dogs Eats Chocolate?

If you have a sneaky dog who managed to break into your Valentine’s candy, you should be aware of the possible health changes they may experience. How sick your dog becomes will depend on a number of factors like, weight, age, health and the type and amount of chocolate consumed. Since chocolate toxicity is based on the amount of theobromine and the size of the dog, it’s easy to see how a small dog could be in trouble before a larger dog. For example, a 16-pound dog, would be in trouble if he consumed four ounces of baker’s chocolate (or one pound of milk chocolate).

In smaller quantities, the symptoms of theobromine poisoning are usually gastrointestinal. At higher doses, your dog could die from irregular heartbeats known as cardiac arrhythmias or cardiac arrest. Symptoms of a chocolate toxicity in your dog could start as early as within the hour after they eat it up to a few hours later.

The good news is that theobromine poisoning can usually be treated if caught early enough. Call your veterinarian or the Pet Poison Control Center (1-888-426-4435*) immediately if you notice any of the following symptoms in your pet:

* Be advised that there may be a charge for this call.

While chocolate toxicity is a scary thing, you don’t have to let fear ruin your romantic day. Be mindful of your dog’s desire to indulge in anything that tempts their taste buds. Keep chocolates and candies out of reach from prying paws and you can enjoy Valentine’s Day, chocolate and all.